“Give us rain and we shall give you blood”: Unearthing the origins of Mexican Magic 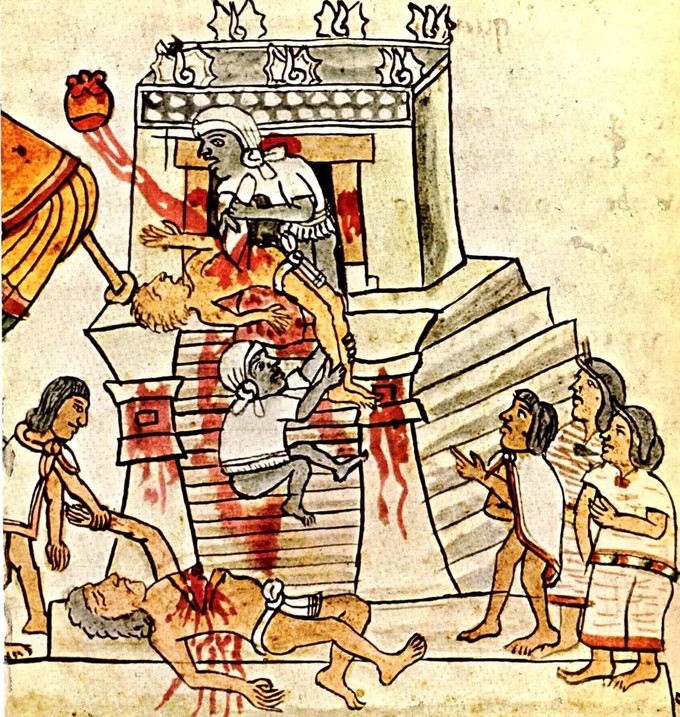 The arid land of Mexico; famine, and dry agricultural seasons subjected the Mexica to uphold rain production as the primary magical endeavor. Hunger, thirst, and aversion to dry season spawned powers of rain to become deified and exalted above all other supernatural influences. Beneath the worship of primitive deities older than Quetzalcoatl, such as Tlaloc and Chicomecohuatl, one can understand a primary principal purpose- the need to ensure rain supply so that the key crop, maize, could flourish and sustain Mexican life. In essence, Cipactli, "dragon-beast" or earth, generated the grains to sustain growth and cause agriculture to plenish. And, the more Cipactli was nourished, the more it could yield; however, producing yield would become synonymous with blood sacrifice.

The need to sustain the earth and bring forth grain created the notion that the Gods must be satiated with blood; human or animal. “Blood, human or animal, was conceived of as rain in another form, of being capable of transformation into rain, the fructifying essence which descended from above” (Spence 45). Undoubtedly, the Mexican man reasoned that rainfall and harvest should be in ratio to the amount of blood-shed annually. As a result, a rain-cult formed from offering blood to the gods and became an integral part in the ever-complex Mexican theology. According to Spence, "the original native deities of Mexico presided over vegetable and cereal growth, and those who came to be identified with the creative idea or with the heavenly bodies were either gods of growth to whom these attributes had become fortuitously attached or were the products of priest speculation (Spencer 45). Consequently, it is evident that the Mexican religion facilitated the need to deify rain and harvest;/growth powers. There was the belief that since the god’s made a sacrifice to create man, the man was indebted to reciprocate by offering blood. “Man must nourish the gods with the magic sustenance of life itself, found in human blood and in human hearts”(Manzano 2).

An example of deifying a harvesting power and offering it blood sacrifice in exchange for flourishment is apparent with Chicomecohuatl and the Xala-quia festival (See codex illustration). The festival was a ceremonial welfare to procure victims for the sacrificial rites. The Xala-quia festival involved a Xalaquia, a captive female with red and yellow painted face to represent maize, who underwent training in dance school. She merrily danced amongst the other participants until daybreak when she was joined by chiefs to dance the “death dance”. Manzano states, “ The entire community then approached the teocalli (pyramid of sacrifice), and, its summit reached, the victim was stripped to a nude condition, the priest plunged a knife of flint into her bosom, and tearing out the still palpitating heart, offered it up to Chicomecohuatl”(3). Essentially, Chicomecohuatl was replenished because she was exhausted growing maize.

The primitive deities of grain such as Chicomecohuatl or rain, Tlaloc, aided in introducing magic in Mexico. Basic needs for rain and growth in an arid landscape helped create heavenly bodies and deities. This demonstrates how rain became exalted above all other supernatural influences. Thus, rain production can be deemed as the primary magical endeavor for Mexica. Whether in the form of offering a Xalaquia to promote the growth of maize or offering slain children to Tlaloc for rain, the basis of Mexican religion is magical, and it identifies with the need for rain or growth. The gods represent the magical figures/deities and the blood sacrifices represent the magical rituals.

Meghan Caulder is a new devotee in the Santisima Muerte cult. She delved into researching and cultivating a relationship with Santisima Muerte eighteen months ago and continues to develop her spiritual journey. Meghan is an alumna from the University of North Carolina at Chapel Hill with a bachelor's in Interactive Media and Journalism. Her interests include writing, journaling, researching and programming. She currently resides in Raleigh, NC. Meghan Caulder is a graduate of the Santisima Muerte Hechizeria Course (2020).

Nagualism: The shapeshifters of Ancient Mexico

Aztec Practices in Medicine and Magic